In 2015 and 2018, the phrase “global growth concerns” was all the rage. The concept helped explain downward movement in stocks and rates that otherwise didn’t always have an immediate justification. Now in 2022, it’s time to bring it out of retirement.

To be fair, “global growth concerns” could be viewed through several other lenses.  These include things like high inflation or tighter monetary policies restricting growth. It’s not as if there is suddenly a new concept causing investors to panic.  Headwinds and tailwinds are always present.  We’re just reaching a point where tailwinds are no longer obviously outweighing headwinds.

One other important point as it pertains to the housing and mortgage market is that we’re also seeing bonds (the financial instruments that determine interest rates) show signs that they’ve completed the leg of their journey toward higher rate levels.  The key motivation for that journey was the abrupt change in tone from the Federal Reserve at the start of the year.  We can see how Fed rate hike expectations spiked at the time and how they’ve leveled off more recently.

NOTE: this chart shows where traders were betting to see the Fed Funds Rate by the end of May and June.  May has flat-lined because the Fed meeting for May already happened.  The orange line shows us that expectations are settling in on a 0.50% hike in June, which is exactly what the Fed has promised. 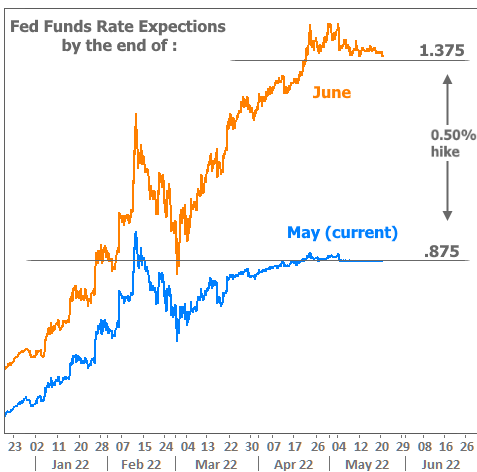 The lines in the chart above come from Fed Funds Futures contracts–fancy words for traders gambling on the level of the Fed Funds Rate at certain points in the future.  There are much bigger bets for longer time frames.  The following chart shows Fed Fund Futures for July 2023 in conjunction with 10yr Treasury yields (a good indicator of general interest rate momentum). 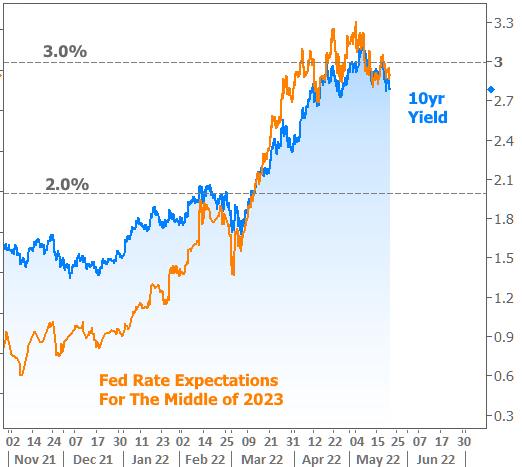 The chart above shows that 10yr yields hadn’t quite priced in the expected surge in the Fed Funds Rate until just recently.  That surge was driven by an even bigger surge in inflation.  It’s premature to say inflation has definitively turned a corner, but there are signs that it could decelerate.  As long as that continues to be the case, rates can continue to move sideways, albeit in a volatile range.

So to recap, we have bonds (aka “rates”) leveling off after spending months on the run from an increasingly aggressive Federal Reserve and stocks losing ground at a faster pace as a host of headwinds hit global economic sentiment. 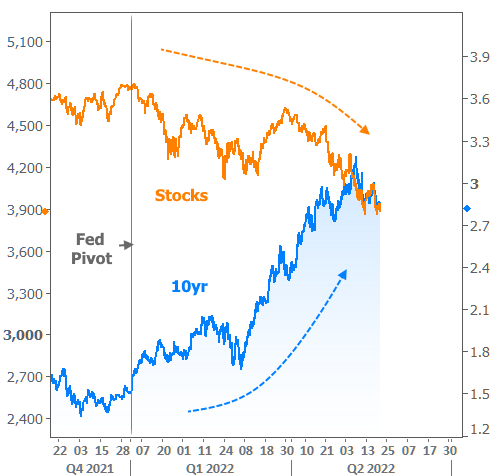 As the chart above shows, most of 2022 has seen stocks and rates move in opposite directions.  This is typical of time frames where the Fed is tightening or even signaling the tightening of monetary policy.  But now that bonds have arguably reached a point where they have accounted for Fed expectations.  They’re free to take other cues.  Stocks have been happy to provide those cues, resulting in pockets of strong correlation as seen over the past 2 weeks. 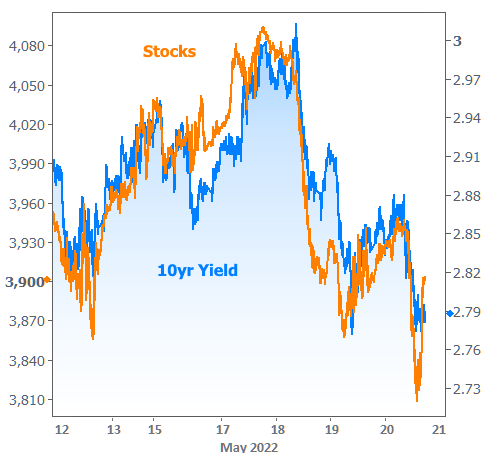 Does this mean the fate of interest rates is dependent on stocks?  Not really.  It just happens to be an impressionable moment for rates, and stocks happen to be making a lot of noise.  That said, in some ways, the fate of stocks and rates is always interconnected to some extent.  For instance, if genuine global growth concerns continue, the implication would be for more downward pressure.

As you consider the prospects for downward pressure (i.e. the chance that rates could fall further), it’s important to consider context.  If we’re only looking at the month of May, things are going fairly well for mortgage rates. 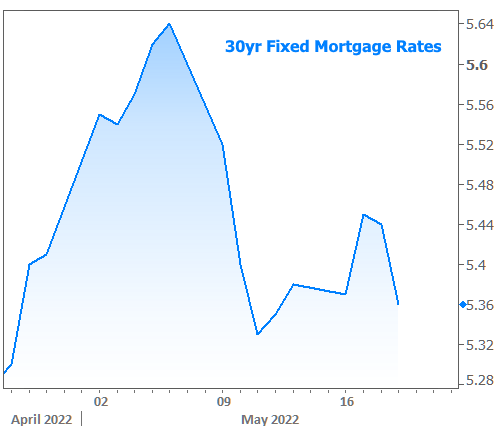 Now, here is the exact same data set over the past few years.  May 2022 quickly gets lost in the shuffle! 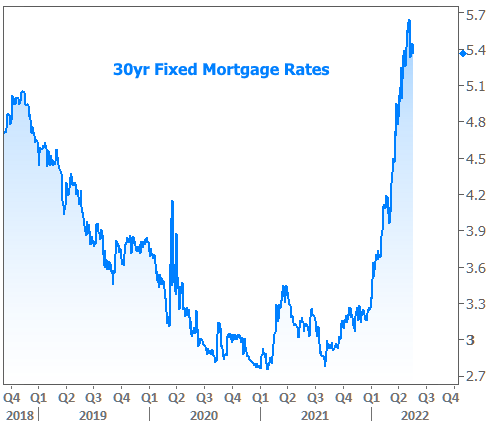 It’s also important to consider the core motivation for that rate spike: rampant inflation and the Fed’s (eventual) response.  All that’s happening right now is that bonds/rates are cooling down relative to the Fed’s response (and perhaps catching a bit of benefit from the declines in stocks).  That will only help so much.  Inflation itself has to begin to fall in a way that the Fed believes is sustainable before interest rates will make significant progress back toward lower levels. If the two most important inflation metrics have anything to say, it might be a bit soon to celebrate: 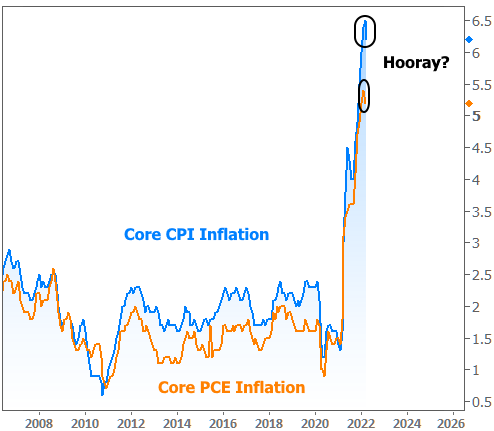 Existing home sales fell almost exactly as much as economists expected.  They’re well off their recent highs, but well above most of the past decade.  Meanwhile, construction of new homes–though nowhere nearly as big–continues its general upward trend. 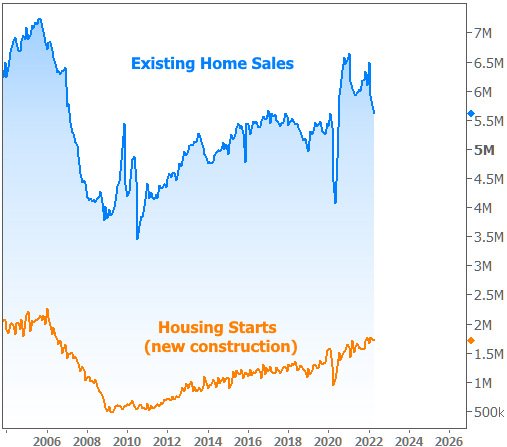 Despite the friendly trend in construction, builders are feeling increasingly gloomy.  Builder confidence dropped abruptly, but it’s worth noting that it is moving down from record-high levels.  The 6-month outlook weighed particularly heavily both due to rates, costs, and shortages. 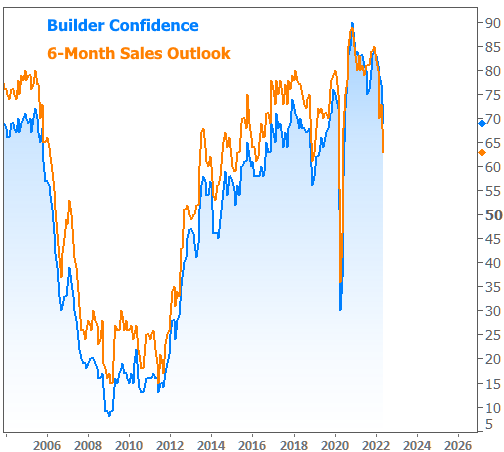 Shortages are evident in the gap between housing completions and building permits, which is now at a long-term high: 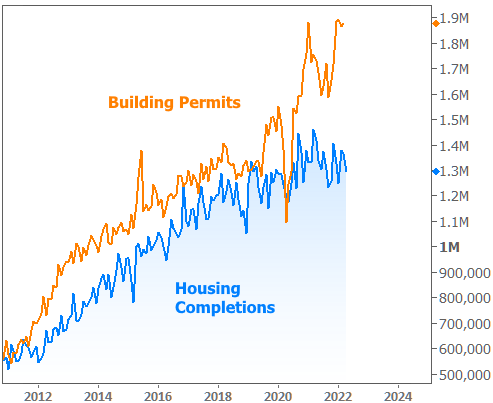 Mortgage applications continue doing what we’d expect in this environment.  Refi apps are about as low as they get and purchase apps are off the boil (but still fairly well in line with what we’d consider to be strong levels before the pandemic). 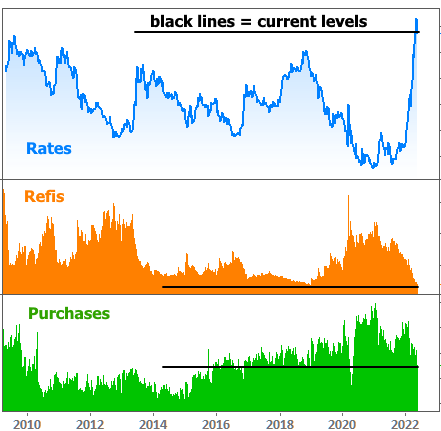 Last but not least, as we consider the legitimacy and impact of “growth concerns,” we have a bonus non-housing-related chart to serve as food for thought over the weekend.  This is the 6-month outlook component of a business sentiment survey conducted by a regional branch of the Fed.  It is thought to do a good job capturing a reasonably average cross section of the US.  As such, traders pay some attention to it as they do with several other sentiment surveys.  This one was notable because it is one of the first to break back into territory last seen in the throes of the 2008 financial crisis. 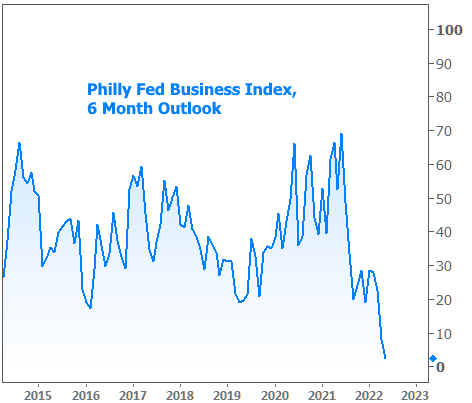