When it comes to measuring inflation, there are multiple economic reports that matter, but it is the Consumer Price Index (CPI) that has by far and away the biggest impact on the market.  This week’s installment was important because the last installment suggested a shift  toward a slower pace of price increases.  In other words, it had the opportunity to confirm that shift or argue against it.

Inflation is important for a variety of reasons, but it affects the market most directly due to its influence on the Federal Reserve’s policies.  Higher inflation means more rate hikes and more rate hikes reverberate through the economy.  While the Fed Funds Rate doesn’t directly dictate mortgage rates, if markets expect the Fed to hike faster than before, interest rates tend to move higher and stocks tend to move lower.

In the following chart, the 10yr Treasury yield represents the “rate” side of the equation, and it is a dead giveaway that this week’s inflation report was lower than expected (Dec 13th).  The chart shows stocks and rates reacting to the Fed policy implications in the first half of the week.  Then later in the week, additional weakness in stocks helped rates remain a bit lower as investors sold stocks aggressively and sought a safer haven in the bond market. 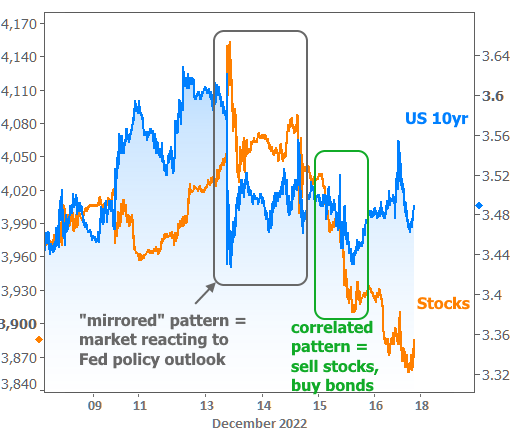 To show just how important CPI has been to shaping Fed policy expectations, the following charts the market’s expectation for the Fed Funds Rate by March of 2023–roughly when the Fed is expected to hit the ceiling for this rate hike cycle.  Each instance of the past 3 CPI reports is highlighted.  The one that came out in October was higher (aka “bad for rates”).  That was the report that resulted in the highest mortgage rates in 20 years a short while later.  November’s report pushed back in the other direction.  Finally, this week’s lower CPI number helped to confirm November’s message. 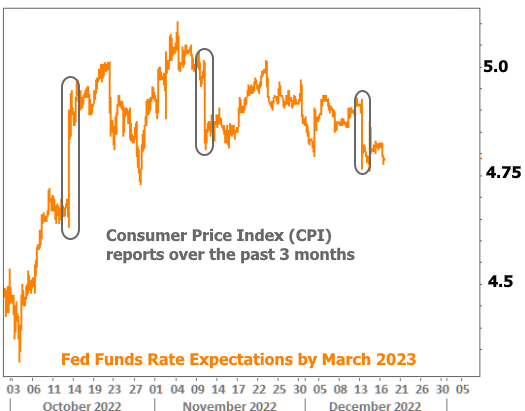 If the chart above looks like a big leveling-off process, mortgage rates agree.  After spiking to long term highs in October, the last two inflation reports combined to create the best winning streak since the start of the pandemic.  It was poetic justice that the current streak just narrowly beat out the summertime rate rally as that one was based on false hope from only one hopeful CPI report. 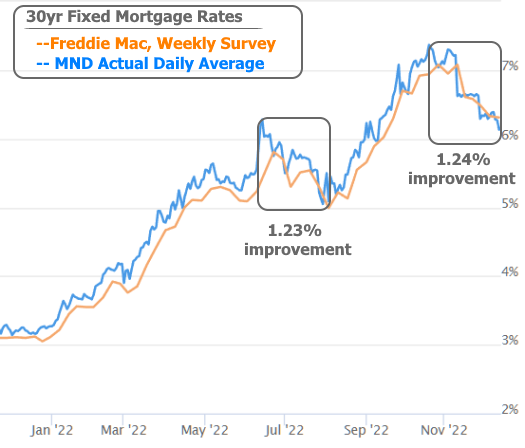 Rates may have had an even better week were it not for the influence of European markets.  For better or worse, the securities that ultimately drive rate momentum are globally interdependent to some extent.  That was a good thing in 2010-2012 when the European credit crisis drove investors into the safest havens and then again in 2014-2015 as the European Central Bank (ECB) announced and then enacted its version of the Fed’s bond buying programs.

The ECB released its latest policy announcement on Thursday this week.  It hiked rates as expected, but other parts of the announcement were slightly unexpected.  Officials saw inflation rising faster than previously forecast and they moved to dial back bond holdings sooner than expected.  The result was a sharp move higher in European rates (benchmarked below by Germany’s 10yr sovereign yield).  It gave pause to US yields at first, but weaker economic data on Thursday morning helped turn things around less mere minutes after the ECB announcement. 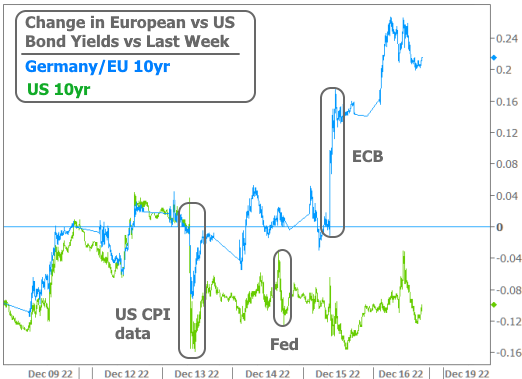 As noted on the chart above, we also had a Fed announcement this week.  It would be easy to lose it in the shuffle based on the market’s fairly docile reaction.  The Fed hiked rates 0.50% as expected and made effectively no changes to their official verbiage.  The most notable development was an upgrade to the Fed’s rate forecasts, which they submit at every other meeting.  We knew they’d be higher based on recent Fed speeches, but markets weren’t expecting them to move up quite as much as they did.  The result was a quick but manageable pop to higher rates that lasted about an hour.  Fed Chair Powell talked rates back down–even if not intentionally–during his press conference by saying that the Fed expected inflation to begin falling more sharply in 2023.

It’s never possible to know exactly what rates will do in the future.  It always “depends” on a number of variables.  At present, we know that rate momentum will continue to depend on incoming inflation data.  That said, the fact that we now have 2 consecutive inflation reports showing deceleration and a similar deceleration in the pace of Fed rate hikes means we’ve all but certainly seen the highest rates for this cycle back in October.  That’s as close to a certainty as there is in an uncertain endeavor.

The upcoming weeks may be “weird” for markets and rates as many of the human beings responsible for turning the gears behind the scenes will be out on holiday or otherwise less engaged than normal.  This can lead to more random movement.  Markets will quickly be getting back to full strength by the time the jobs report comes out on the first Friday in January.