The first few months of 2022 have seen rates rise at the fastest pace since the 1980s as a confluence of known issues collided with unexpected volatility due to the war in Ukraine.

In August 2020, the Fed announced a long-awaited change to its inflation fighting strategy.  Applying lessons from the past decade of monetary policy, the Fed concluded that the economic recovery would have been better for a wider group of Americans if inflation had been allowed to run a bit hotter for a bit longer.  The newly announced framework meant the Fed would be waiting longer to hike rates the next time it was faced with that decision–something that was incidentally quite relevant considering it had just cut rates to record lows (0-0.25%) at the onset of the pandemic.

Along with the big rate cut, the Fed was also buying mortgage debt and Treasuries at the fastest pace ever.  This bond buying made low rates even lower. The inflation landscape in August 2020 suggested no end in sight for the Fed’s rate-friendly policies.  The line in the following chart would need to rise well above 2.5% for the Fed to even open a conversation on tapering bond purchases or hiking rates. 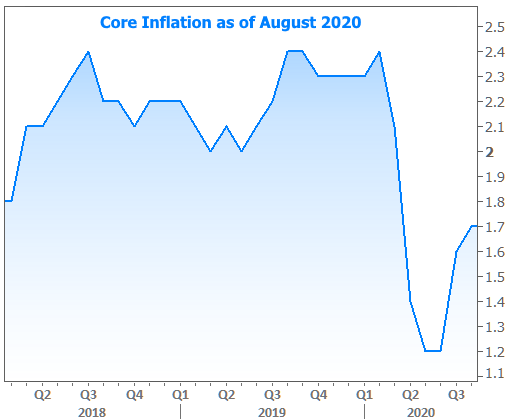 In the months that followed, inflation actually declined as the more normal months from late 2019 and early 2020 fell off the year-over-year calculation.  But by the 2nd half of 2021, it would be an understatement to say that things were changing quickly. 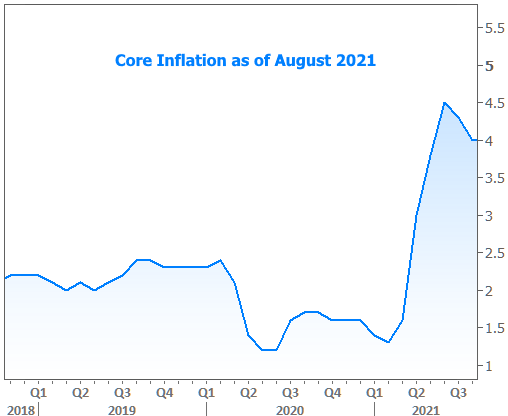 Despite this surge in inflation, the Fed believed it would subside with pandemic-related supply bottlenecks eased.  It was determined not to shortchange the economic recovery by making what it feared would be the mistake of tightening policy too early to achieve the best economic recovery.  Unfortunately, this happened: 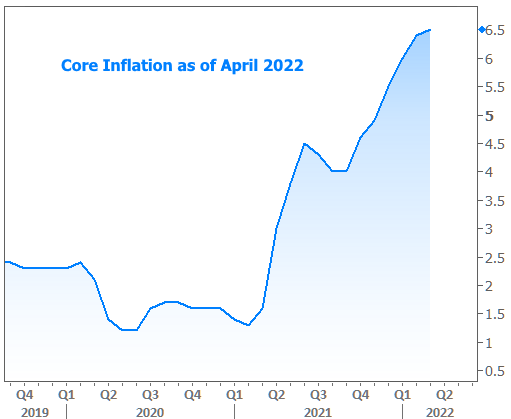 Issue 2: The Underestimation of Post-Covid Inflation

By the 4th quarter of 2021, it was clear the Fed had miscalculated the inflation trend and had to move quickly to tighten policy.  They began the process in September, but they were forced to make a series of harsher adjustments as inflation intensified.  The onset of 2022 lines up very well with the market’s most jarring realizations about the Fed’s sense of urgency, largely due to the minutes from December’s Fed meeting (released on January 5th). 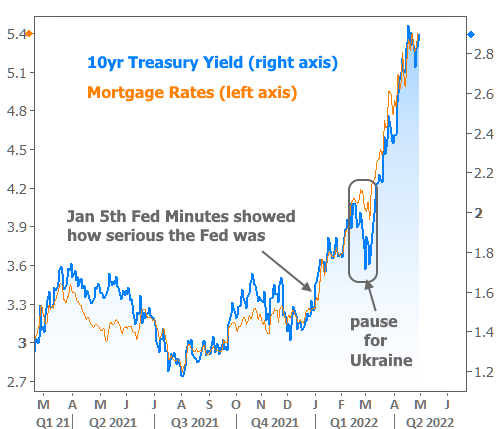 Issue 3: The Pause For Ukraine

As the chart above shows, rates recovered for several weeks at the onset of the Ukraine war.  This is logical because massive geopolitical risks tend to drive investors toward the safest havens like US Treasuries (and mortgage bonds, to a lesser extent).  In the case of Russia and Ukraine, however, there were also inflation implications associated with the war.  The narrative quickly became one that was going to be bad for rates either way: if the war ended quickly, rates would bounce higher as investors moved out of safe havens.  If the war persisted, rates would bounce higher as inflation fear ran wild.

The bottom line with the Ukraine issue is that it stretched rates briefly lower like a rubber band, thus increasing the momentum with which they continued to skyrocket.  The Ukraine effect was easiest to see in shorter term rates and expectations for Fed rate hikes. 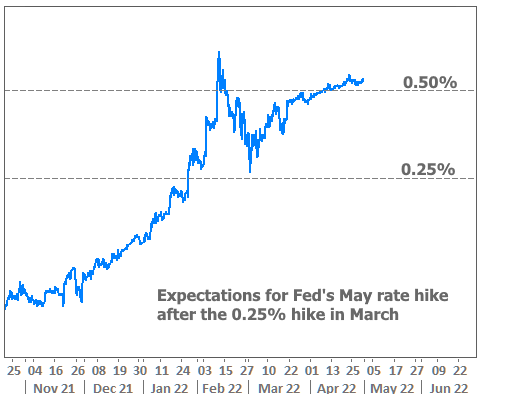 But the rubber band effect was felt more readily in longer term rates like those for 30yr fixed mortgages. 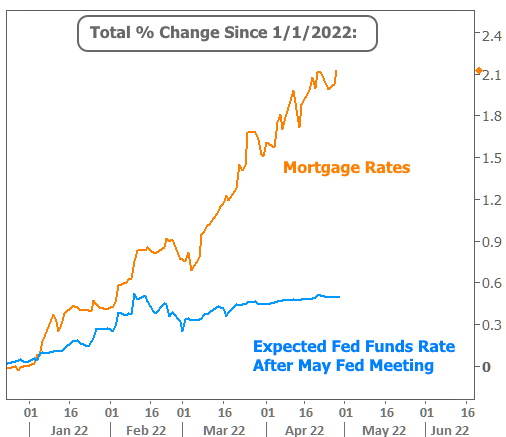 Mortgage rates are based on the trading price of mortgage-backed securities (MBS).  The Fed had been buying MBS by the truckload until it began winding down purchases in late 2021, ultimately ending any new purchases in March.  That said, MBS basically mean the Fed is a mortgage lender, and as payments come in on those mortgage holdings, the Fed was still reinvesting them back into the MBS market.  In this way, the Fed was not technically adding new bonds to its portfolio–just replacing those that had “run-off.”

Past precedent suggested it would be a while before the Fed would allow its balance sheet to begin running off, thereby reducing the amount of MBS purchases.  This process of decreasing overall MBS holdings is known as “balance sheet normalization.”  But week after week–especially in March and April–Fed speakers hinted at a much faster pace of normalization.

Normalization is a bigger issue for MBS than for US Treasuries (the other type of bond on the Fed’s chopping block).  MBS are also more susceptible to volatility.  Last but not least, several Fed speakers suggested the Fed could actually SELL MBS outright–something that had never been on the table before.  These combined issues lead the mortgage market to underperform the Treasury market.  With Treasury yields also moving higher, this meant mortgage rates had to move higher at an even faster pace.

The chart below captures the underperformance in mortgages, both in terms of 30yr fixed rates rising more quickly, and in terms of investors’ valuation of MBS (the higher the green line is, the worse MBS are doing versus Treasuries). 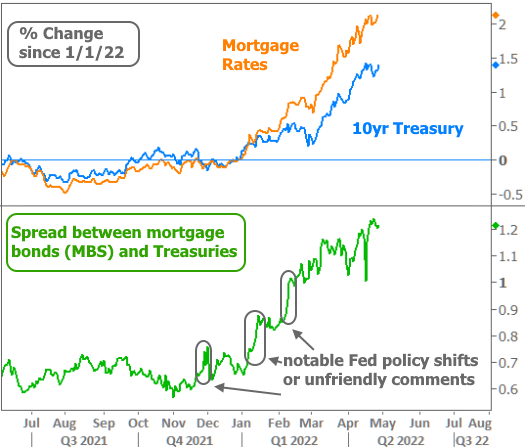 Bringing it All Together.

The net effect is that 30yr fixed rates have risen almost an additional 0.60% above the spike suggested by the often used 10yr Treasury yield benchmark.  To be clear, this has much more to do with the Fed’s normalization outlook than it does with the rate hike outlook.  The mortgage market really doesn’t care much about how big the next Fed rate hike will be.  It cares far more about how high the Fed will ultimately hike and how quickly it completely stops reinvesting MBS proceeds.  Longer term rates have suffered much less than shorter-term rates: 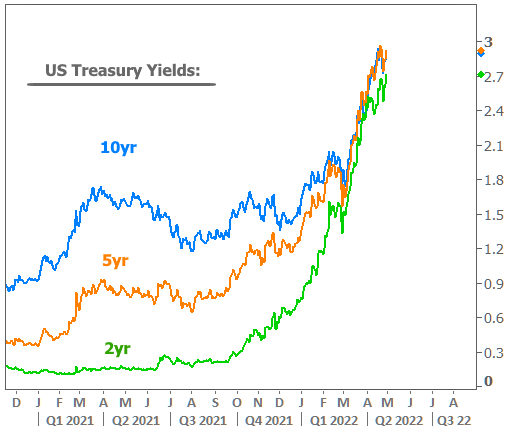 Is There Any Hope?

First off, it’s important to understand that much of the impact from the Ukraine war and the associated commodity price spike has yet to work its way through inflation reports.  Much depends on how the inflation narrative unfolds in the coming months.  What we do know is that when short-term rates rise to meet longer term rates as seen in the chart above, the “next thing” that happens is for all rates to move lower again.

That sounds like great news!  But be warned: the timing of that “next thing” is measured in “months” at a minimum, and in 2005, it took more than a year for the big reversal to happen. 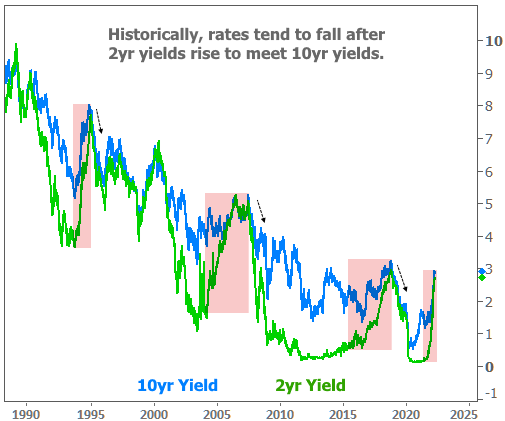 In the short term, rates continue to look for opportunities to consolidate.  Several recent opportunities have failed, so we continue to defend against repeat performances (i.e. expect the blue line to move up and out of its most recent box) while hoping to see something change. 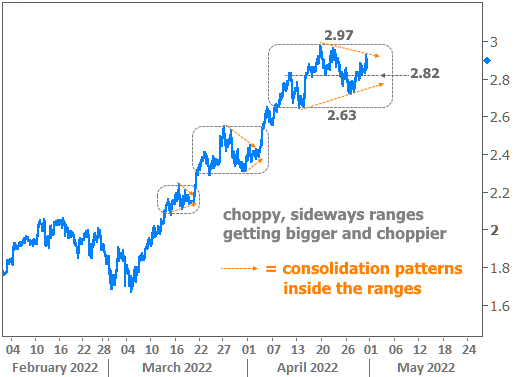 The biggest to-do in the coming days will be next week’s Fed announcement and press conference.  NOTE: it is already a foregone conclusion that the Fed will hike by 0.50%.  The market has already priced this in (for more a month, in fact!):

Nearly as certain is the fact that the Fed will announce balance sheet normalization.  There too, the bond market has already been trading accordingly.  What we don’t know is whether the bond market has over-prepared or under-prepared for the normalization announcement.  We also don’t know what other details the Fed may communicate, or if they will be different than those suggested by the meeting minutes from early April.  Either way, significant volatility is possible next week, especially surrounding Wednesday afternoon’s Fed announcement.